The 2018 IFAA Provincial Indoor Championship was this year held at the Protea club. We tried other venues in the past but due to to number of entries and the double round shot at the provincials, the Protea, with the larger number of butts, remains the ideal hall.Before we look at the event flow and result – A minor, yet important issue surfaced which should be restated.
It concern the rules, regulations and specifications of archery equipment. The rules governing archery equipment is equally as important as any of the other rules relating to the event. Shooting styles and classes are defined by the differences in the archery equipment – generally consisting of the differences in Bows, arrows, sights,scopes, pins, release aids, stabilisers, etc etc. As with any rule, or regulation, including laws of the country etc. it is the participants obligation to know, understand and follow the rules and laws. Just as with a country’s laws’, it is not up to the law enforcers or police to explain laws or rules, it is the citizens responsibility to know the laws. Although this might sound like a harsh comparison, it is the same with the laws of sport. The participant can not expect that an official needs to explain a rule or regulation or that a rule is not operational unless raised by an official . It is therefore obviously not sufficient to say an infringement should be acceptable because someone else had said it was OK. Nor is it sufficient to say that a regulator, official, inspector, or whatever had not timeously pointed out that this rule exists. Simply put; it is the participant obligation to know the rules and regulations if he/she wishes to compete and participate in any event.

Regarding the event – The twenty-two archers, after eagerly warming-up and preparing for the long day of shooting, settled down to start the scoring rounds. Immediately it was clear that nerves where going to play a role as some early ‘oops’ shots missed the mark, and full scores becoming less likely in the first round.

The top archers were hoping for the normal full 300 scores – but it was not to be. Our world champion, Estelle slipped two points to earn a 298, Luther dropped five points for a 295, Jordaan dropped a single point for 299 and Gerhard in the Veteran section also dropped slightly with a two point fall to 298. Still very good scores but now making it very hard for Luther to emerge on top of the Freestyle class as he usually does, and adding pressure on all these archers to get their full 300 in the second round.

The second round looked a lot more promising when the top archers were hitting the target-centre consistently, and suddenly the possibility of eight full score results looked possible. But eventually the scores of some archers slipped a little and only three of them ended with the sought after 300 points.
Estelle, Luther and Jordaan obtained the magical 300 score and their combined scores of the two rounds would pull them well into the lead.

After a long day of shooting, the Ladies Recurve group was dominated by Marie-Louise; The Ladies Freestyle was also convincingly won by Estelle.
In the Men Freestyle the scores were much closer, but Jordaan Roux with a 299 and 300 was a clear winner – with the second and third places decided by a ‘X’ count – placing Luther second and Fredrik third.
In the Recurve men – Hendrik Brummer form Clover archery finished with a healthy lead; and in the Vets men Gerhard was very dominant after shooting a 298 and 299.
Dylan Herselman in the Recurve cubs section shot consistently well and obtained the win as well as setting new WC – IFAA Single and Double round records.
Similarly Estelle bettered her AMFU record with her excellent 300 54X points finish for a total of 598 and 102 X’s.

In the Provincial Team event – five teams of three archers per team, entered. The Bowtime B team triumphed with 1794 point, followed by Bowtime A with 1789 and in third place the Italian club team on 1780. (The entry fees of the team event was proportionally shared by the three podium teams)

Well done to those who broke records, won their style categories or obtained scores for colour recognition. See you all at the Summer Championship 2018. 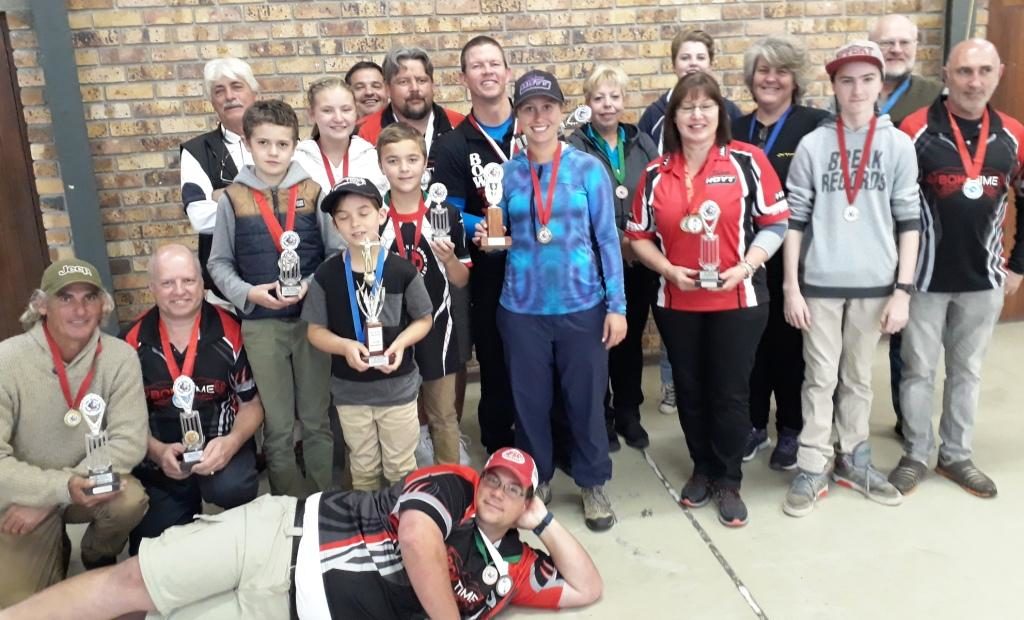