Often when I write these reports I refer to the windy conditions and the adverse affect it had on performances.  I must be writing in a seriously strange way because we had two archers and one coach fly down to the Western Cape for the experience of shooting in exactly those conditions. 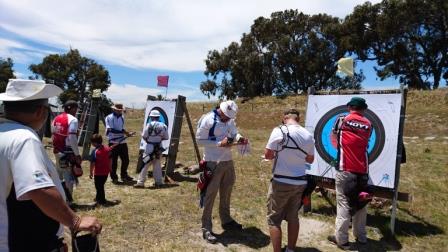 Well, then again, when the reports of the bad weather in Copenhagen was received, I suggested that people should come to the Western Cape as those conditions are the norm here.  Also, it is one thing to practise in not ideal circumstances and another to actually compete in those circumstances.  The pressure in competition is an animal of a different kind and as a norm, we give up to easily when we cannot achieve a record of some kind. So it was with some expectation that we welcomed these two archers who wanted to test their ability to cope in adverse conditions in a competition environment.

The week leading up to the Quattro was one filled with very intense wind conditions.  I had to do some repairs on my carport in response to the wind.  In fact I was expecting the wind to be so bad that competition would not be possible with safety being compromised.  Day 1 started with the conditions being benign to say the least.  That first 720 made me think that all this money spent on travel had been wasted.  Which just proves that you cannot accurately predict the weather.

Someone did however remember to bring the batteries for the flags on the butts before the 2nd 720 approached.  By the time the first scoring arrows flew for 720 No. 2, the wind had arrived in all it’s glory.  Now a direct comparison could be drawn between ideal conditions and downright nasty conditions.  (And interesting lessons were learnt).

Both days saw a few spectators drop by.  Day one had a lot of emergency vehicle sirens close by for what seemed like some time.  Day two noise of a different nature as motorbikes passed by en route to and from the annual Toy Run.

Both days also saw extreme heat pounding down on the field and not even the wind cooled that down.  Day two of competition started as day one ended, very windy and it got worse.  It was clear however, that unless I declared the conditions dangerous, the competitors were here to stay.  The reason?  The answer is in a question: Is my technique solid enough for me to be able to cope with a challenging environment?

It was incredibly pleasing to have 2 archers and a coach made special effort after the last arrows flew to come and thank me for providing them with the opportunity to compete in these circumstances.  “It was an invaluable experience.  Precisely what we had hoped for, worth every cent.”  A junior archer remarked that she learnt so much while competing in this wind.  A compound archer also remarked that he was going to figure out a way to be able to be competitive in the wind.

So if you need to train under tournament conditions to be able to cope in Copenhagen or Antalya, come on down.  I am sure we can find some wind for you.  We have fun, safely and shoot arrows – we know not how else to live a fulfilled life.

Till the next time we meet on the shooting line – Golden Arrows to all!