The Western Cape IFAA Summer Indoor championship was held at Bow-time archery range on the 12th February 2017. This was the last event in the 2016 / 17 cycle presented as a qualifying event for WCAF Provincial and SANAA National Colours. A very good turnout meant that the event had to be split into two session with morning session starting at nine and the afternoon session thereafter. 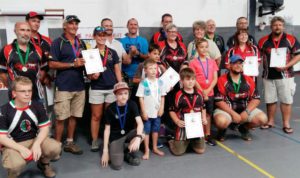 Some excellent scores were obtained, with particular mention required of Estelle Jacobs and Jane Dolhoff (who both have shot a 300 before) obtaining 299 out of 300. Then of course Phillip de Lange (AMBU) with his usual full score of 300 (49 x’s) and although battling with a painful shoulder, Luther de Koker also achieving his regular full score of 300 (47 x’s). We must of course also mention good scores from the Cubs, with Adriaan Jacobus jnr (CMFU) on 296 and Henk Brummer CMFS(R) with a 267.

What a please to have a female addition to the cubs with the young Emma Uys at 8 yr joining with her recurve bow – and by being our first young girl with a recurve at a provincial IFAA event – she set the Provincial record at 175 points. In fact two new records were obtained – as mentioned above CFFS(R) Emma Uys, and in the VFFU style, Sharon Swanepoel bettered the record of our beloved Edna Trimmer, to a new high of 286 (19 x’s) 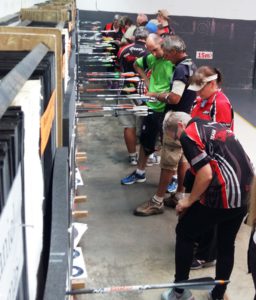 Furthermore, two archers had, during the 12 month cycle, managed to achieve the scores that may result in them getting SANAA National colours. We wish them the best for the National Indoor Championships.
Terence van Moerkerken (AMFS R)
Henk Brummer (CMFS R)
Adriaan Jacobus Louw (CMFU)